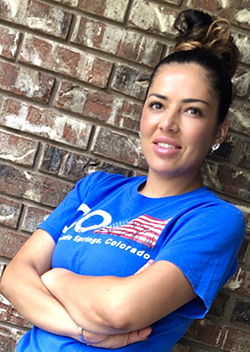 For one student, the path to OLLU’s PhD program in social work began in crisis. At the age of 13, Carol Meza Bakke experienced domestic violence, physical abuse and rejection.

After she was placed in foster care in Pittsburg, Kansas, Meza met a caseworker who changed her life: Tyleen Caffrey, a second-year doctoral student in the Worden School of Social Service program.

“When Tyleen came into my life, I felt like God sent an angel to save me and guide me,” said Bakke, 33. “To help me understand that what was going on in my home was not my fault and that I could overcome that stage of my life.”

To communicate with a teen who spoke limited English, Caffrey took Spanish. To bring levity to family visits, Caffrey used humor and laughter. To connect with a troubled adolescent, Caffrey shared how she survived abuse at home and trauma in foster care.

“I felt so lost and left in the dark,” Bakke said. “She really understood what I was going through and knew how to get me out of that darkness.” 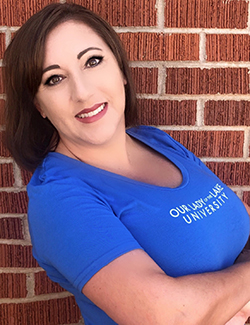 Within four months, Bakke was able to reunite with her family. Twenty years after Caffrey’s intervention, Bakke has not only followed her mentor into social work, she has followed Caffrey into the PhD program at OLLU.

“When Tyleen got accepted to OLLU, she called me and told me all about the program and encouraged me to apply for it,” said Bakke, who served in the U.S. Army in Iraq before becoming a social worker. “I was so scared and did not think I would get accepted into the program. Plus, it was a program that was taking me way out of my comfort zone. But as I continued to follow Tyleen on social media, I became motivated to apply.

“My husband Chris told me to stop thinking about it, and just do it. I remember opening my computer and saying, ‘Here we go!’ Fast forward a few months. Dr. Rebecca Gomez called from OLLU when I was on my way home from an exhausting day at work, and she gave me the news. I cried so much. The first person I called was Tyleen! And now Tyleen is my mentor for this program.”

“Carol is like the ‘Starfish Story’ for me -- ‘I made a difference for that one,’” Caffrey said. “I got to continue this journey throughout her life as I watched her blossom into an amazing wife, mother and social worker. Now we get to continue this PhD journey together, even planning our first co-authorship on a research project.”

As Bakke juggles her doctoral studies with her work in the child welfare system, she has an eye on the future.

“After I get my PhD, I want to conduct research about military sexual trauma in hopes of changing policy at the federal level,” Bakke said. “I would also like to conduct research with my husband, Chris Bakke. I hope to go into higher education, where I will have an opportunity to teach and continue to conduct research. And I want to set an example for my children, Caiden, Heidi and Larkin, in hopes that they will follow in my footsteps.”