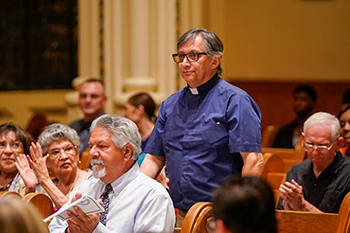 Known as “Father Eddy” to parishioners and friends, the reverend pastors the only Catholic church in Uvalde, a city of more than 15,000 residents. For two weeks in May, he presided over funerals for 12 victims of the mass shooting in Uvalde. “It’s as if (it is) one huge funeral that is not ending,” he told an ABC-TV affiliate in May.

Father Eddy grew up in a family of 11 children in Uvalde. “I was the laziest of them all,” he said.

As a teenager, he spent one day picking cucumbers in a field with two friends. “At that time, they were paying 75 cents a bag of cucumbers. That whole day we worked, the three of us only filled one sack. So, we each got 25 cents. From that day on, we were going to college.”

In her son’s youth, Genoveva Morales became the lead plaintiff in a desegregation lawsuit against Uvalde schools. In 1970, she participated in student-led walkouts with eight of her children.

“How beautiful to look at this endowment in light of my mother’s struggle for equal education,” the reverend said. “She didn’t graduate from high school but had a junior high named after her and now she has an endowed scholarship in her name from my alma mater. Wow, it’s beyond words.”