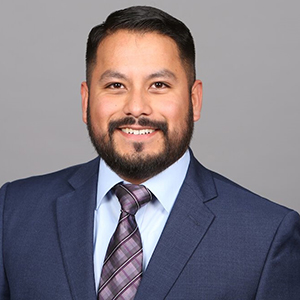 Roberto Cardona (BS 2012) is heading to Super Bowl LVI on Feb. 13 as an Assistant Athletic Trainer with the Cincinnati Bengals.

“This is an amazing feeling,” said Cardona, 31, whose Bengals defeated the Kansas City Chiefs in overtime on Jan. 30 to advance to the Super Bowl. “It’s something you work your whole life for.”

With the score tied, 24-24, Cardona stood near the 50-yard line as Evan McPherson prepared to kick a 31-yard field goal for Cincinnati. When the ball sailed through the uprights, Cardona joined the celebration.

“I jumped in the air and yelled,” he said. “I ran onto the field and hugged some players. I was super excited. I called my mom while I was on the field. I wanted to celebrate with my parents and thank them for supporting my career.” 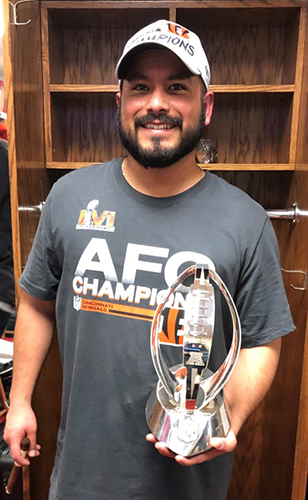 Cardona was born in Mexico and raised in Eagle Pass. An older brother, Jorge Cardona, attended OLLU and invited Roberto to campus. The visit went well. An OLLU recruiter visited Roberto in Eagle Pass and persuaded him to become a Saint. Roberto majored in kinesiology.

“OLLU Is a family,” Roberto said. “So many people, so many professors, helped me along the way.”

After graduating, Roberto earned his master’s at Texas Tech University Health Sciences Center and served athletic training internships at multiple schools. In 2017, the Bengals selected him from more than 100 applicants to become an athletic training fellow. When the fellowship ended, Roberto became an Assistant Athletic Trainer.

The work is long but gratifying. Roberto begins at 6 a.m. and leaves, on a good day, around 8 p.m. In between, he attends to an assortment of fractures and sprains and helps players rehabilitate from more serious injuries. Now he has realized a dream.

“I’m glad to be representing my alma mater, Our Lady of the Lake, at the Super Bowl,” Roberto said. “I learned so much at the university. What I’ve been able to accomplish has been with help from the professors and friends and the Sisters of Divine Providence.”