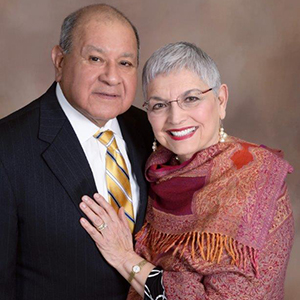 Located on the second floor of Main Building, the new school features the Veronica Salazar Media Center, a state-of-the-art, multimedia production center which opened in 2016 with funds from the first phase of the $2.1 million gift.

“We want our graduates to become the best journalists, the best broadcasters, the best mass media in the country,” Salazar-Escobedo said. “We hope the national markets will recruit them.  We want them to become evangelists for Our Lady of the Lake University, to inspire other students to look at us. We would like for the new school to become a boutique, where students would be on a waiting list to get in.”

Recent graduates anchor, produce, report and photograph news for media across the country, including Univision in Miami, BBC News in Washington, D.C., and KSAT-12 and News 4 WOAI in San Antonio.

“There is no limit where our graduates can go,” said Salazar-Escobedo, a charter member of the San Antonio Women’s Hall of Fame.

A native of Rio Grande City and a former OLLU trustee, Salazar-Escobedo spent 35 years with the San Antonio Express-News. She started in 1969 as an executive bilingual secretary to publisher Charles O. Kilpatrick. In 1973, she began a weekly column, “Dedication Rewarded,” which focused on accomplished Mexican Americans. Salazar-Escobedo later became a recruiter for the newspaper and vice president for community relations.

Admired for their service and civic leadership, Verónica and Rubén have led fundraising campaigns for charitable organizations and donated generously to nonprofits.

In 2015, then OLLU president Sister Jane Ann Slater, PhD, CDP, told the Escobedo’s about talented Mass Communication majors who were working with antiquated equipment. After meeting with several students, Verónica and Rubén decided to fund major improvements to the Mass Communication program.

“I thought, ‘If they are already Emmy winners with outdated equipment,” Verónica said, “can you imagine -- I get goosebumps -- what they can accomplish with state-of-the-art equipment?’”

One student she met, Casas, won two Lone Star Emmy Awards for work she produced for  LakeFront TV. A second student, Jessica Ortiz (ʼ17), won a Lone Star Emmy in 2018 as an assistant producer for Univision 41. A third student, Chan’Cellore Makanjoula (’18), produced a documentary film, “Mr. Zoot Suit,” that was screened at film festivals across the U.S. and won multiple awards. “Mr. Zoot Suit” originated as a class project at OLLU.

“I saw myself in the students when I visited them,” Verónica said. “I was like them at their age. The students inspired me and Rubén.”